Bacillus anthracis has been classified by the CDC as a Category A bioterrorism agent due to its high lethality, hardiness, and ease of weaponization. The spores, which are resistant to heat, UV light, microwave radiation, and many otherwise useful disinfectants, can remain dormant in soil for years. If anthrax were to be weaponized, the most likely method of dispersal would be by aerosol release.

A single case of inhalational anthrax should be assumed to be a bioterrorist threat and a public health emergency. The incubation period for inhalational anthrax is usually 1-13 days and, rarely, up to 60 days. In the past, there were considered to be 2 stages of anthrax: early and late. On the basis of the clinical, radiologic, and microbiologic findings of the 11 inhalational anthrax victims in 2001, 3 stages have been identified.

Early-prodromal:
The first stage consists of nonspecific symptoms such as fever, dyspnea, cough, headache, vomiting, chills, weakness, abdominal pain, and chest pain. Laboratory tests are also nonspecific at this stage. If diagnosed in the early prodrome stage, the prognosis is very good if the appropriate antibiotics are instituted. These initial symptoms occur for 24-48 hours, and the patient may show signs of transient improvement after 2-4 days.

Intermediate-progressive:
Inclusion criteria can be any one of the following: positive blood cultures, mediastinal adenopathy, or pleural effusions. The patient may also have nonspecific findings such as high fever, dyspnea, confusion, syncope, and nausea/vomiting. If diagnosed in this stage, the prognosis is still good if antibiotics are administered, pleural fluid is drained, and supportive care is provided.

Late-fulminant:
Inclusion criteria can be one of the following: meningitis, respiratory failure (requiring mechanical ventilation), or shock. Findings from the previous stages may be present. The latter fatal manifestations are believed to be the result of exotoxins secreted by the anthrax bacilli (lethal factor, edema factor, protective antigen). If diagnosed in this stage, the prognosis is poor; survival is much less likely.

Exact mortality rates are hard to determine. Historically, mortality rates have been as high as 89%, but many of these cases were before the development of critical care units or even antibiotics. Prior to the events of 2001, there had not been a reported case of inhalational anthrax since 1978. In 2001, there were 11 cases of inhalational anthrax attributed to terrorist events, 5 of which resulted in death.

Bacillus anthracis is present in both domestic and wild animals throughout the world (mainly in agricultural regions of South and Central America, Southern and Eastern Europe, Asia, Africa, the Caribbean, and the Middle East) and can be transmitted by their meat, wool, or hides. Therefore, veterinarians and those in the meat-, wool-, or hide-processing industries are the most at risk for contracting naturally occurring inhalational anthrax. Inhalational anthrax should be considered in postal workers and those who handle mail or packages when the patient presentation includes the symptoms listed above. Anthrax is rarely found in animals in the United States. Person-to-person transmission of inhalational anthrax does not occur.

The anthrax vaccine is a cell-free filtrate vaccine. The CDC regulates its use. In 2002, the US Department of Defense reintroduced the vaccination of military personnel and essential emergency civilians against anthrax.

Chest x-ray or CT shows enlarged high-density mediastinal and hilar lymphadenopathy along with pleural effusions. Pulmonic infiltrates may be seen but are not common. The late-fulminant stage may include meningitis, respiratory failure, or shock. 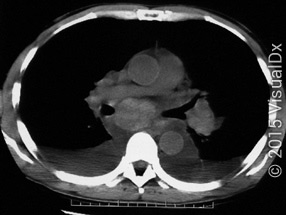 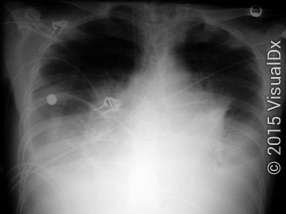 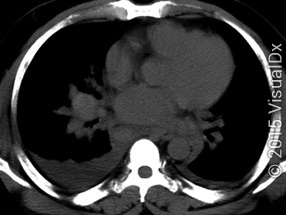 Unlock Your Unlimited Access to VisualDx. Start your 30 day free trial. Cancel at any time.

VisualDx is trusted for diagnostic decision support in over 2,300 hospitals, large clinics, and medical schools across the globe.

The data contained in these World Wide Web pages, such as text, images, and graphics, are for informational purposes only and are not intended to be a substitute for professional medical judgment. Please read our website terms of use and privacy policy. Unauthorized use of this site is strictly prohibited. Copyright © 2020 VisualDx®. All Rights Reserved. U.S. Pat. 8,538,770 www.visualdx.com